It’s less than a week before Christmas, and even though it’s not ‘my’ holiday, I like the giving that goes around at Midwinter. As a knitter, that means (typically) I choose a pattern and make about a dozen similar objects (socks, scarves, whatever) starting in August. This year I spent most of the autumn moving, so now it’s coming up to a common deadline and I get to hustle. And what’s I’m making is cross-over slippers:

See how cozy they look? The soles are made separately from the sides, and as both are in garter stitch, they are easy and quick to make. I’ve now completed five sets, and plan to finish another three to send out or give away by the 25th.

I use a yarn with a slow color fade, because it adds interest to the side pieces; the soles are knitted in a plain color of the same weight of yarn – in this case, in charcoal. This works well with worsted weight yarns, such as Impeccable by Loops & Threads (Michael’s home brand). Impeccable in plain colors yields 285 yards per 4.5 oz, or 260m per 100g. For this pattern, I used a 5mm circular needle, and work both soles at the same time, and both sides at the same time – using two balls for each, of course. And Impeccable is 100% acrylic, so you can throw the slippers in the washer and dryer (on delicate cycles) and they’ll come up smiling every time.

5mm (US 8) needle; one tapestry needle to sew the slippers together

Creating the sole, starting at the bottom of the foot.

Row 1: Cast on 6 stitches for the sole of the slipper.

Row 3: Knit in the front and back (kfb), knit until the next to last stitch and kfb, k1.

Repeat these two rows until there are 14 stitches (for men’s slippers) or 12 stitches (women’s) on your needles.

Continue knitting in garter stitch until the sole of the slipper is 2½ inches shorter than the foot length you’re aiming for. These slippers have a tremendous amount of stretch and they stay on the foot better if they are stretched out a little bit. Counting after the increase rows, I found about 20 ridges was about the right length.

Continue until you’re down to six stitches; knit the wrong side row, then cast off.

Cast on ten stitches. Knit all stitches until it’s twice as long as the sole. So, if your soul is 12 stitches wide, that’s four ridges on each end, plus 20 in the middle, or 28 ridges total, doubled. That makes about 56 rows on the side pieces, or a bit longer if your soles are longer. I know, neither soles nor sides look big enough, but when you sew them together, it’ll work. Again, I knit both sides at the same time, so they are the same length.

Double over the first side strip so that you can pin the middle to one end of the first sole. Using the tapestry needle, sew the corner ends of the side strip to the center of the other end of the sole. Using contrast yarn, tack the side and sole together about ½ inch in from the edge, on the ‘wrong’ side of sole. Use whip stitch to sew round the edge, preferably ending at the toe. Turn the slipper right side out, and use the tail from the cast on to sew down one end of the side piece. Then sew down the other end OVER the toe, using the end of the cast-off yarn. This will all make sense when you actually assemble the slipper.

Repeat the assembly for the other slipper, with the top cross-over piece going the other way. Sew in any ends, and you’re done!

I like using slow-color-change or ombre yarns for the sides, and solid colors for the sole.

I’m currently working on side pieces that are eight stitches in charcoal, then two stitches in a short-color-shift rainbow yarn. I tried this yarn with alternating ridges, but it just didn’t look right. That’s the beauty of a quick pattern: if you don’t like the results, you can try again with speed and efficiency! 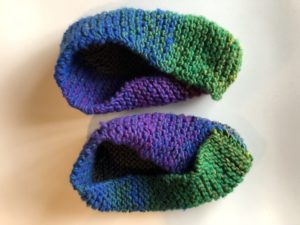 And here is the printer friendly .pdf file:  Crossover Slippers.