I recently finished reading 25 Loaves by William Alexander, and it inspired me to start making bread for the first time in 40 years.  (The premise of the book is that Bill wants to replicate the perfect French country loaf, or boule, and so commits to making bread every week for a year, or until he gets it.  His memoir is full of fascinating details about wheat, milling, yeast, levain, bread-making techniques, and how they turned out.  Oh, and there are recipes in the back, too.  You can find the book in all the usual places, plus Bills own website:  www.williamalexander.com)

So here I am, eight weeks into ‘shelter-in-place’, and with enough time to get inspired!  The first batch was plain old in-the-loaf tin mixed white-and-brown bread.  The next one was no-knead gluten-free bread baked in a smallish Le Creuset — much better texture, crust, and flavor (and I will post that recipe tomorrow).  Today… ah, today was a truly authentic, beautiful and delicious baguette à l’ancienne — a loaf made the old-fashioned way with a levain (starter, like with sourdough), an overnight fermentation, and a very hot steamy oven.  Here is this morning’s baguette: 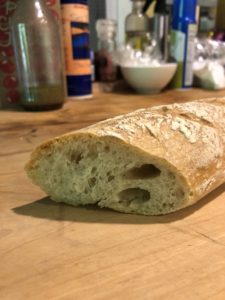 And here is the recipe, with (as always) a printable .pdf at the bottom.  This is a Bill Alexander’s formula and technique, lightly modified by John Kirkwood’s online video and recipe.  If you love bread, you will find the process and the result very satisfying!

I hate to burst anyone’s fantasies, but the typical baguette in a Parisian bakery, that very symbol of French cuisine, simply isn’t very good, made quickly by machine, from pumped-up flour. If you ask for a baguette à l’ancienne, however, you might pay a little more, but get an artisan baguette, made slowly, with a wild-yeast starter. This is my own interpretation of such a baguette. Take solace in the fact that, no matter how badly you might think it comes out, it is better than half the baguettes sold in Paris.

The long, cold fermentation brings out the natural sugars of the wheat. I usually ferment the dough overnight in the refrigerator, but I’ve also made these the same day with a 4-hour refrigerated fermentation, and I can’t tell the difference.

1.   Feed the levain at least 2 hours or the night before beginning. [Stir together 25g flour and 25g water, then beat into the existing levain to make more. Incorporate lots of air!]

2.   Mix all ingredients and ‘autolyse’ for about 25 minutes – that is, allow the dough to rest, covered by a towel. This lets the gluten relax and re-align.

3.   Knead by hand for about 7 minutes until dough is silky and elastic.

4.   Cover with oil-misted plastic wrap. If doing an overnight fermentation, place in a bowl, cover closely with oiled plastic wrap, and put immediately in the refrigerator. For same-day baking, ferment at room temperature for 2 hours, then ferment in the refrigerator an additional 4 hours. [I left half the dough in the fridge to bake the next day; the second baguette turned out even better than the first one!]

5.   Remove from refrigerator and wait for dough to reach temperature (2 to 3 hours). Yes, by this time, the dough has fermented for about eight hours, so time yourself accordingly.

6.   On a floured countertop, divide dough into 4 equal parts of about 212 grams each (don’t go crazy trying to make them all exactly the same), shape into balls, and allow to rest, covered for 15 minutes. (I sometimes omit this step if in a hurry, but it does help to relax the dough for the next step.)

7.   Press each ball into approximately a 3- by 5-inch rectangle, and form baguettes as shown in any number of YouTube videos or bread books (in short, do the classic “letter fold,” then fold once more down the middle, seal the fold, then gently roll out). You should have nice little blisters or bubbles of gas in the dough – leave them!

8.   Proof in a floured couche (a heavy linen canvas) or, lacking that, between folds of parchment paper supported by rolled tea towels, for 45-60 minutes. Place an old cast-iron skillet on the bottom shelf of your oven and a pizza stone near the middle rack. [I use a shallow Le Creuset enameled cast iron casserole.]

10.   With four baguettes to place into your oven, it’s better to use a wide baking sheet rather than your peel. Sprinkle the sheet liberally with corn meal or rice flour (or cover with a sheet of parchment paper), transfer the baguettes to it (I use a narrow piece of quarter-inch plywood as a flipping board, but you can use transfer them by hand as well).

11.   Using a fresh single-edged razor or a lame, make several overlapping diagonal slashes on each baguette.

12.   Transfer the baguettes to the stone with a clean jerk back of the baking sheet. Quickly add a cup of water to the skillet and turn oven down to 480°F. Do all this quickly so that the steam stays in the oven.

13.   Bake for 20-25 minutes until crust is a rich brown and center registers 210°F or a rap on the bottom of the loaf produces a hollow percussion sound.

14.   Cool on a rack for at least one hour before serving.

1.   Stick to the recipe exactly, because using the correct quantities, proportions, and ingredients are all very important for successful results.

2.   Use scales for the measurements including the water; don’t convert to cups or measuring jugs, as they are too inaccurate.

3.   Use proper unbleache white bread flour with at least 12% protein. Check the ingredients list on the side of the flour bag:  protein may show in grams per serving but just work it out, it needs to be 12g of protein per 100g of flour. Plain or all-purpose flour is not the best for making bread because it doesn’t have enough protein/gluten to create the right texture. [Although I have had very good results with ordinary all-purpose flour when I use a levain as well as yeast.]