After making two successful batches of the white No-Time Bread (using the recipe from https://www.thekitchn.com/easier-no-knead-bread-in-a-hurry-40653), I decided to try the same method using half rye flour and half bread flour.  The results were predictably chewier and with less rise, but acceptable with some ripe Camembert;  the crumb was even, and the crust was just right.  Here is my adapted recipe, with some added tips… 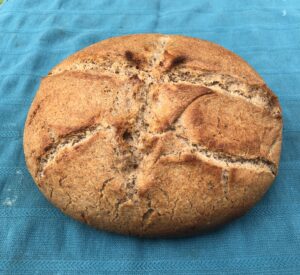 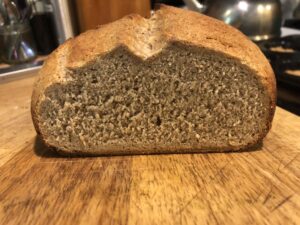 Make sure to grease both the rising bowl and the Dutch oven or Le Creuset casserole.  Once you’ve finished the final rise, don’t poke at the dough.  Use oven gloves to take the casserole out of the oven, invert the bowl over the casserole and nudge the dough until it falls into the casserole.  Make sure to score the top with a sharp knife.  Bake, covered, for 25 minutes, then uncover and bake for 12-15 more minutes.  Let the bread cool and firm up for at least 10 minutes before slicing and slathering with butter or serving with soup.

This makes one loaf, about the size of a rustic boule.

1.   Place the yeast, sugar, and water in the bowl of a heavy-duty stand mixer and stir to combine. (I don’t have a stand mixer, so I used an electric hand mixer.) Measure out the flour and salt in a separate bowl.

2.   Arrange a rack in the middle of the oven, remove any racks above it, and heat to 450°F. Place a Dutch oven (or Le Creuset enameled cast iron casserole with a lid, or equivalent) in the oven as it heats.

3.   Now that the yeast has had a few minutes to bubble up, add 3 cups of the flour, the salt, and the vinegar.  Beat on low speed for 30-40 seconds until everything is combined and forms a dough that is wet but not sloppy.  (If you have a stand mixer, add the remaining flour and beat with a dough hook for three minutes.)  Spread the remaining flour over your work surface, dump the dough on the counter, and knead vigorously for 5 minutes, or until the dough becomes extremely elastic.  The dough will no longer stick to your hands, but will stick slightly to the counter.

4.   Lightly grease a large microwave-safe bowl with vegetable oil – I use Pam spray.  Transfer the bread dough into the bowl and turn it to coat in the oil.  Cover the bowl with a very wet kitchen towel.  Cover the whole thing with a dry tea towel and put in the microwave.  Microwave on HIGH for 25 seconds.

6.   Shape the dough into a ball and plop it into the preheated Dutch oven – I just invert the bowl and let the bread fall into the casserole.  Quickly slash the top with a lame or sharp knife.  Cover and bake for 25 minutes.  Uncover and bake another 12-15 minutes until the crust is golden brown and the internal temperature hits 210°F.

7.   For smooth slicing, let the loaf cool at least 30 minutes before slicing and serving.

Leftover bread can be stored cut-side down at room temperature for up to 3 days.  It can also be tightly wrapped in plastic wrap and aluminum foil and frozen for up to 3 months.